Currently of 807 reviews received from our customers, 86.0% said they were satisfied with the service provided during their car hire

Excellent check in process with the lovely Daniel. Will update further on the rental experience as a whole :)

Amazing service provided by this company. I rent a car for only two days but I had to return it a day earlier . I had refunded a small amount for early return. I did not expect that. The staff there are very nice and helpful. Explaining well everything. Definitely I will use this company again when I will need . Thank you very much .

The service was quick and great! The car looks like new: clean and with smart screen. Definently will come again

Great customer service and the car was clean. Easy to pick up and easy to drop. 5 minuts walking from atocha. I had no issues so i dont know how they handle problems but i recomend the use of their services.

Vehicles must be returned to the Centauro car park, on the opposite side of the road to our office, right next to the restaurant 'Meson Segoviano'

Hire a car in Madrid Atocha with Centauro Rent a car and enjoy the security and confidence that comes with a fleet of rental cars that is renewed each year. Add to your booking any extras you need when you hire a car, GPS, comprehensive insurance without excess, approved child seats, etc.

Get cheap car hire at Madrid Atocha and drive through the land which guarantees good weather most of the year.

We hope to see you in our car rental office in Madrid Atocha! 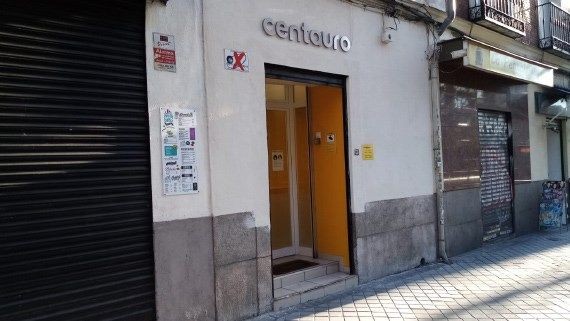 At Centauro Rent a Car we offer a wide selection of cars available to hire at Madrid Atocha which is renewed yearly.

What to see and do and where to visit Madrid and the surrounding areas with your car hire.

Opened in 1851, currently it has two stations that provide trains for long distance as well as medium distance and suburban trains offering great connections to the underground and bus networks (Estación de Atocha-Cercanias) and which receives over 90 million passengers during the year. Enjoy Madrid and hire a car when you arrive at Atocha train station or if you arrive in by plane at Madrid Barajas Airport.

Renting a car at Atocha train station in Madrid is the best way for holiday travellers or business travellers alike who are staying in Madrid and the surrounding areas. Rent your car in Atocha and move around the city without having to depend on public transport and timetables.

Madrid has all the charms that a modern city has to offer, with the charisma of a city that has been moulded over many centuries, and that fills every corner with history. The extensive cultural options on offer allows you to enjoy all kinds of leisure activities, gastronomic routes, cultural events, and many different types of shopping; from the high street shops to the exclusive luxury brands for those that can afford it. Here we propose some different routes of the essential places to visit whilst in Madrid.

Routes around the centre of Madrid

Our route in Madrid with our car hire starts at the Palacio Real (Royal Palace), the former residence of Spanish kings (and was rebuilt in the 18th century after suffering a fire) and enjoy a stroll around the lush gardens that surround it, the Jardines de Sabatini or the Campo del Moro. The idyllic surroundings will make you forget that you are in the centre of Madrid. In front of the Palacio Real you can find the Catedral de la Almudena (Almudena Cathedral), this beautiful building was completed at the end of the 20th century and is one of the marvels of the city.

At the Plaza de la Villa we enter into the ‘Madrid de los Asturias’ where we travel back to medieval times and its stately homes. We can stroll around and see three of the most emblematic buildings of old Madrid; Casa y Torre de los Lujanes, of gothic style from the XV century or the Casa de Cisneros palace from XVI century or the Casa de la Villa from the XVII century.

Time to take a break to have a drink or some food at the popular San Miguel market. From here we can carry on walking to the Plaza Mayor where we can see the 10 archways built in the XVI century and that leads to the old square where you can view the equestrian statue of Felipe III in the centre. Cross the arch of the ‘cuchilleros’ to find the tourist area where many bars and restaurants of the Cava Baja are located.

We continue to a place that must be visited in Madrid, the Puerta Del Sol, an emblematic place where three of Madrid’s main attractions are: the kilometre zero, where all the roads in Spain leave from. The figure of the Bear and the ‘Madroño’ (strawberry tree) which represents Madrid and the centre of the square, which is a mythical place where thousands of Spaniards meet every year to eat grapes on the chiming of the bells and to bring in the New Year.

We recommend you try some typical Asian food in the Leganitos street, from here we can access the Plaza de España to contemplate the beauty of two of the most magnificent buildings in the city, the Casa Gallardo and the Real Compañia Asturiana de Minas. To get the most out of your day and your route around Madrid, take in a show on the Gran Vía and from here we go to the Parque de la Montaña where the Templo de Debod is. This is a beautiful spot at the top of the city and where you can watch the sun set over Madrid. The perfect place to take some amazing pictures of the Plaza España, the Palacio Real, the Catedral de la Almudena or the Casa de Campo.

Enjoying a walk in the centre of Madrid invites you to enjoy the popular ‘Paseo del Arte’ area – the Art Walk; this ‘triangle of Art’ as it is known is where some of the greatest treasures of art are kept, and where in a radius of one kilometre you can find three of the world’s most important museums.

Our first visit will be to the Museo Del Prado, opened in 1819. This museum boasts a collection of more than 8,000 paintings, considered the best gallery in the world. It brings together masterpieces from some of the great European painters such as, Velazquez, Goya, El Greco or the Bosco. From here, we go to the Thyssen-Bornemisza Foundation, the world’s most important private collection that owes its popularity to Flemish & Dutch master painters of the 17th century. Essential also, is a visit to the Reina Sofia National Art Museum, where you can enjoy the contemporary paintings of works of artists such as Dalí, Juan Gris, Miró or Picasso. If you still have time, another museum is the Caixa Forum, with its vertical garden or the beautiful Botanical Gardens are both highly recommended.

Close to the ‘triangle of art¡ area, you will find one of the most charming places in Madrid, the ‘Parque de Retiro’ (Retiro Park). You must take a ride in one of the boats that you can hire on the artificial lake and the ‘Palacio de Cristal’ (Crystal Palace), built in 1887 and made of metal and glass to exhibit flora & fauna from the Philippines (which at that time was still a Spanish colony). Today, the Palace houses temporary exhibitions of great interest. When leaving the Parque del Retiro, don’t forget to take a walk through the ‘Puerta de Alcalá’ until you reach the ‘Plaza de Cibeles’, also popular landmarks in Madrid.

A visit to the capital is not complete without a visit to the 3 World Heritage Sites, so we will travel with a car hire to Aranjuez, San Lorenzo del Escorial and Alcalá de Henares.

The first essential stop is in Aranjuez, an idyllic place on the banks of the river Tajo, just 45kms from the capital, which was chosen by the Bourbon dynasty to establish their residence in Madrid. Once here, we recommend that you visit the ‘Palacio Real’ (Royal Palace), the ‘Museo de Falúas’ (Falúas Museum) and the ‘Casa Del Labrador’ (stately home) with its impressive gardens of more than 150 hectares of fruit trees and mythological characters.

San Lorenzo del Escorial, located 50km north of Madrid, and only 45 minutes away by hire car, houses the ‘Monasterio Del Escorial’ (Escorial Monastery), one of Spain’s most important architectural monument of the Spanish Renaissance and that all holds a Royal Pantheon, a chapel containing the bodies of Spanish Kings in the 17th century.

Finally, a mandatory visit with our hire car is to the birthplace of Cervantes in Alcalá de Henares, recognized as a World Heritage City by the Unesco and were we can see the impressive and majestic University of Alcalá, the Cervantes birth house-museum or the Magistral Cathedral.

Parking for free in Madrid can seem like an odyssey. We’re letting you in on the best-kept secrets to navigate the capital by car and not die trying.