Currently of 757 reviews received from our customers, 88.0% said they were satisfied with the service provided during their car hire

Reasonably-priced car with a convenient location near Santa Justa train station. Friendly staff. We experienced no issues and the entire process was really smooth. We'd rent from them again in a heartbeat!

Excellent service and car at collection in Seville, very friendly team (again!) and at Malaga airport where I dropped off, courtesy bus to airport also a polite guy! The best of all, Centauro returned my deposit for fuel whilst at their office, that alone will make me return to use them again! 5 Star!

Traveler from South east Asia. Good experience with the booking interface and great experience with service staff (Donald) during car collection and return process. Donald is super friendly, helpful and detailed during this entire period!

5 stars, there is no deposit needed for rental, just deposit for petrol. We had full insurance, 2 drivers, full tank of petrol. The staff was very helpful and friendly. You can find cheaper rentals but with deposit for rental or partial insurance. We highly recommend this place to our friends and will use Centauro services next time

This was my first experience renting a car and I must say it was amazing. The process of getting the car took only a couple of minutes, the car was super clean, and in excellent condition, and the same went for the delivery (to another city). The employee came smiling, he checked the car, and announced me that everything looks great, and he refunded the deposit the same moment. Everything went smooth from start to finish, If i ever rent a car again, I will look no further.

Come out of the station taking the ‘Salida Avenida Kansas City’ exit sign, cross the main road and straight ahead you will find the Centauro Rent a Car office, 150mts in front of the station.

Instructions for return and map

Vehicles must be returned to the Centauro car park. 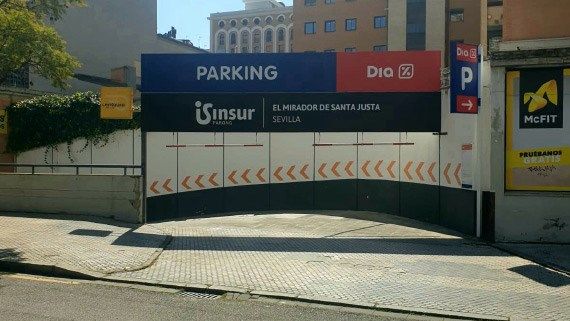 Hire a car in Sevilla Santa Justa with Centauro Rent a car and enjoy the security and confidence that comes with a fleet of rental cars that is renewed each year. Add to your booking any extras you need when you hire a car, GPS, comprehensive insurance without excess, approved child seats, etc.

Get cheap car hire at Sevilla Santa Justa and drive through the land which guarantees good weather most of the year.

We hope to see you in our car rental office in Sevilla Santa Justa! 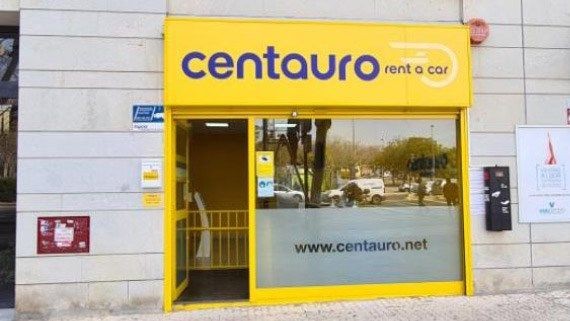 At Centauro Rent a Car we offer a wide selection of cars available to hire at Sevilla Santa Justa Train Station which is renewed yearly.

The Santa Justa train station in Seville is the largest station in all of Andalucía and the third largest in Spain behind Madrid’s Atocha station and Barcelona’s Sants station. The Santa Justa station covers over 80.00m2 with 12 train tracks and offers a commercial area with restaurants, coffee shops, clothes and shoe shops and foreign exchange bureau.

Hire your car at Santa Justa station is the easiest way to enjoy your holidays in this region. Seville Santa Justas is well connected to destinations all over Spain and offers high-speed train services such as the Ave, Alvia o Talgo to Madrid, Barcelona, Huelva, Cádiz or Malaga. In addition, Santa Justa station connects Seville to other cities in Andalusia, Castilla La Mancha or Extremadura by long distance trains and metropolitan trains used within Seville.

Outside the train terminal, you will find parking areas, taxis and local bus stop. The station is also well connected by road using a car or public transport. If you want to get to Seville Airport from Santa Justa train station you can take Line EA ‘Especial Aeropuerto’ (Special Airport) which takes around 35 minutes and makes stops at the most popular areas of the city.

Without a doubt, by hiring a car at Santa Justa station is a great option to more around at your own pace and get to know one of Spain’s most beautiful cities.

Seville, capital of Andalusia is the rich heir to the passage of numerous villages that have conferred on it the open and multidisciplinary character it offers today to anyone who arrives on their land wanting to know one of the most beautiful cities in southern Spain. Thinking of car hire in Seville Santa Justa is a good option to tour the city in a simple and comfortable.

We must prepare ourselves to enjoy a journey full of rewarding experiences that will leave an indelible mark on the memory of the most curious traveler. We must think that the city of Seville passed cultures as mythical as Roman or Arab and in all of them played a crucial role for the development of the ancient and modern world.

A striking example is the fact that the Andalusian capital played a crucial role as the port of the Americas in trade between Europe and the New World. This information definitely supported the projection of Seville and its role in the development of the West.

Nowadays, all these questions have shaped the profile of a modern Andalusian capital, open, welcoming, friendly, interesting, cultural and endearing. Do not forget the car rental in Seville, because it will be an ideal way to move around a very comfortable city to travel by car.

Seville and the Guadalquivir

Few cities have such a close relationship with a river. However, the Guadalquivir has become for Seville an artery full of poetry and bewitness, capable of enamorar the two banks of the city and offer its own and strangers, prints of authentic beauty.

It seems that the Guadalquivir was known to be loved by the Sevillians and, perhaps, from there comes that mutual infatuation that turns the river's journey into one more way of knowing more closely the city.

Taking one of the boats that make the journey along the Guadalquivir can be an unparalleled experience, especially for those who want to take pictures of both parts of the city.

We should not worry if we are moving in rental cars in Seville, because there are a number of public car parks and parking lots, which make it easy to leave the vehicle well parked while we enjoy our walk through one of the most eloquent rivers in Spain.

If there are two neighborhoods with solera in Seville those are Triana and La Macarena. Each is located on one of the banks of the Guadalquivir River. You can go from one to another even if you have opted for the car rental in Seville Santa Justa, because the city Seville is well prepared to join its two parts with numerous bridges.

The best of each neighborhood is in those taverns and small bars where you can have a wine, a beer and a tapa so typical. Even on a lucky day, you may be able to attend the live performance of some spontaneous who starts singing flamenco or playing a guitar full of magic and trunk.

You have to know that each neighborhood has its own Cofradia, which gives shelter and notoriety to the Virgin of each neighborhood: La Esperanza de Triana and Esperanza Macarena. To understand the fervor of both brotherhoods you can not miss the journey of their processional steps during the days of Holy Week. Here, again, it is imperative to carry the camera by hand.

The Barrio de Santa Cruz and the Giralda

I know that we have chosen to rent a car in Santa Justa, but it's time to park it for a little while and enjoy an unbeatable pedestrian walk. Getting lost in the streets of the famous Barrio de Santa Cruz is priceless.

We will move to an area declared World Heritage Site and we will reach the Cathedral of Seville and its magnificent tower: La Giralda, a symbol, and well deserved, of the Andalusian city. Apart from the beauty of an area that seems to have been made for walking, with its orange trees and that unforgettable aroma of orange blossom, the layout is full of places to practice one of the national sports and best taste: tapas. Let yourself be carried away by the flavors and textures of a purely Spanish culinary art.

Finally, before returning to take your rental car from Sevilla Santa Justa, you lose a moment to look back at the Torre del Oro. Legend has it that one day the monument was covered with this rich material. Today we only see it in stone, but its beauty, as lookout of the Guadalquivir is impressive. By the way, make no mistake. In the capital of Andalusia there are still many things to see. So be a little adventurous and investigate. Car rental in Seville at Santa justa station will help you to get more comfortable.

Rent a car with Centauro Rent a Car and do not miss anything about this exciting province.

Planning your next getaway to the “Feria de Abril”? Find out how to enjoy it like an authentic Sevillian!