Currently of 509 reviews received from our customers, 74.0% said they were satisfied with the service provided during their car hire

This was hands down the best rental car experience we've ever had (after spending the summer renting about 8+ different cars throughout Europe) Kiriakos was so friendly, positive and helpful he really made our time in Sardinia unforgettable. Great service!

Picking up the car was very easy; with the shuttle bus you're in no time at the rental location. Helped quickly and received a brand new car (300 km). Bringing back the car was as easy as picking it up. Nice and friendly staff; helped quickly and no problems at al. Great service!

The most simple & easy car hire we have experienced. The staff were efficient & friendly The car - a Ford Puma - was new, comfortable & clean. Would highly recommend & will use the company again in other destinations.

We rented a car for one week and a brand new car was provided. We selected the most expensive insurance in order to avoid any risks and avoid the need of using a credit card and it worked properly. When returning the car, they just returned the keys, they checked the fuel level and … done ! They also provide a very nice transfer shuttle to the airport . Staff is very friendly and polite .

Once you have collected your luggage come out of the main exit of the terminal and straight in front of you continue walking on the pedestrian path in the direction of the parking area ‘Settore A’. At Parking A3 you can wait for the Centauro Rent a Car Shuttle which comes every 10-15 mins.

Rent a car in Olbia, Sardinia with Centauro Rent a car and enjoy the safety and confidence offered by a fleet of rental cars that is renewed every year. Add to your reservation any extra you may need in a rental car, GPS, full coverage with no deductible, approved children chairs, etc...

We will be waiting for you at our car hire office at the Olbia - Sardinia airport! 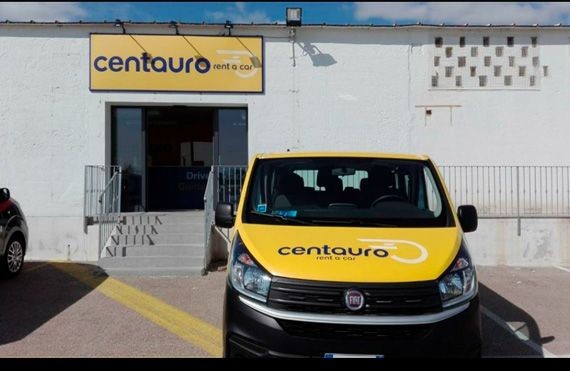 At Centauro Rent a Car we offer a wide selection of cars available to hire at Olbia Airport Sardegna which is renewed yearly.

What to see, do, and visit in Sardinia and its environs with your rental car.

The Olbia Costa Smeralda Airport is the main airport of this magnificent island located in the middle of the Mediterranean Sea. The airport is located northeast of the island and southeast of the town of Olbia, it serves as a national and international connecting point with different cities in Italy, Europe, and Africa. The so-called Emerald Coast is one of the central and most popular vacation spots for Italian tourists.

The airport is located just four kilometers from the historic city of Olbia, and north of Cagliari, capital of the island and most populated city. Its fastest road accesses are the SS125 and the SS729; some of the most popular destinations are Rome, Madrid, Barcelona, ​​London, Paris, Palermo, Naples, Milan, Lisbon, Palma or Berlin.

The island of Sardinia, which belongs to the Republic of Italy, is a place that will leave no visitor indifferent. It will take several days to get to know the island and explore it at ease, since there are many outstanding places to visit, starting with its two most important cities, Olbia and Cagliari. So it is preferable to drive since there are numerous ways to enjoy the route by car, driving through unforgettable places, enjoying the trip and visiting all the nooks and crannies of this place, making as many stops as you may want.

What to see in Sardinia

You cannot miss this Mediterranean island’s most important archaeological site. The Ruins of Nora are what is believed to be the first city or populated site of Sardinia, settled by the Phoenicians and the Tartessians.

Just 30 km from the ruins you can visit Cagliari, the capital of Sardinia. It is located in the south of the island and has a historic center from the 14th century. It is a village with cobblestone streets and a classic Italian Renaissance style, with plazas where you can stop and watch the time go by while enjoying a meal or an aperitif.

If you like driving, you can go from the capital to the Gulf of Orosei through a road that runs, almost in its entirety, very close to the Mediterranean coast. This zone includes all the north of the island, and its great importance resides in its towering cliffs, its coves, and beaches. Some of them, such as Cala Gonone or Poetto, are close to the lagoon of Molentargius, where flamingos abound.

Gallura is located about 130 km to the northwest of the Gulf of Orosei, a section of the island made up of important regions such as Santa Teresa, Capo Testa and its granite landscapes. You can visit the beach of Cala Grande or the village of Calangianus, as well as the so-called Tomb of the Giants, a Neolithic archaeological complex.

The island of Sardinia is the largest in the Mediterranean, so although at first glance it may seem easy to cover, the truth is that getting to know it well is a time-consuming task. Therefore, the best option is to spend ten days of your vacation to enjoy one of the most beautiful road trips of your life.  Of course, if you can’t spend so much time, focus on the most relevant places.

Our optimal route to see the island starts in Cagliari, capital of the island and where you should stay prior to starting the journey. From there, the best option is to get to the town of Quartucciu and the Monte Urpino Park. From that point the trip continues to the Colostrai Beach and the Orosei area; although the destination schedule is flexible depending on your interest in beach, mountain or historical places.

Further on, it is essential to visit the Goloritzé cove, Olbia, the Moon Valley, the village of Alghero, Palmavera, the famous Neptune's Grotto, the Castelsardo, Bosa, Tharros, Oristano, the Nuragic Village of Barumini and the complex of Buggerru. As we have said, these are the most important destinations and the optimal route.

In general, the climate in Sardinia is one of the mildest in the world, as found in many areas of the Mediterranean Sea. The island reaches an average temperature of 20 degrees in summer, and up to 12 degrees in the cold season, although extreme temperatures are very rare.

The Sardinian cuisine presents most of the features of the Italian cuisine, plus some typical dishes such as the Culurgioni, the Malloreddus, the Grilled fish and sweet cookies called Amaretti. Other typical foods are: goat cheese, traditional sausages, ice cream and Pan'e saba, a bun with almonds, chocolate or cream.

If you're looking for a travel plan that won't fail, consider taking a road trip through the island of Sardinia. Beaches with crystal clear waters, ancient cities with charming churches and ruins of Roman constructions, and rich and diverse gastronomy are just some of the attractions that will make you fall in love with every part of this Mediterranean paradise.