Currently of 878 reviews received from our customers, 88.0% said they were satisfied with the service provided during their car hire

Great Experience. Rented a car for two weeks on July. The car was new and clean. Pick up was quick and simple, with none of the usual insurance pushing. Drop off was algo good and all deposits were quickly released. Also, important to note, had no unpleasant surprises at my credit card statement. Recommended.

We rented a car from this company for the first time and the sir at the desk was very patient and explained everything in detail and clearly. The car we got was cool and great. We can enjoy our holidays in Sicily perfectly. Highly recommended！

We rented several cars through the years from different rent-a-car. This was the best experience I had. Quickly received the car key, the ladies at the desk were helpful friendly, and professional. All the information was given clearly. The deposit of €100 was returned within 48 hours when returning the full tank. The car was clean and without issue. The only advice is to go with the full cover for piece of mind. Highly recommended

Impressive service! Picked up car from Catania airport where I only waited for 2 minutes before I was served. The car was in excellent condition, very clean and in new condition. Drop off was also very easy and took no time at all. No deposit was needed to confirm the booking. Highly recommended and will definitely use Centauro again!

We were VERY pleased with every aspect of this rental! Walter waited for us because our flight was delayed and even called to be sure we could find the desk ( it is hard to find in Catania). The price was fair and the car was an easy to drive manual hybrid. Overall great experience...mostly thanks to Walter!!!!!!!!!!

Once you have collected your luggage, exit the building and follow the directions to terminal C. Keep walking until you see the sign ‘Autonoleggi-Rent a Car’ and then you will see the signs to the Centauro Rent a Car office.

Rent a car in Sicily - Catania with Centauro Rent a car and enjoy the safety and confidence offered by a fleet of rental cars that is renewed every year. Add to your reservation any extra you may need in a rental car, GPS, full coverage with no deductible, approved children chairs, etc...

We will be waiting for you at our car hire office at the Sicily - Catania aiport! 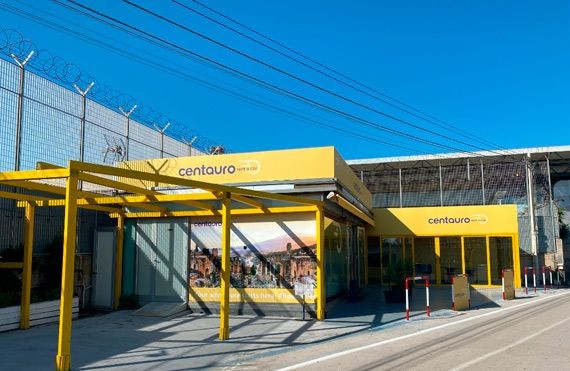 At Centauro Rent a Car we offer a wide selection of cars available to hire at Catania Airport Sicily which is renewed yearly.

Five kilometres south of Catania, the second largest city in Sicily you can find Catania-Fontanarossa Airport, the main gateway to this Italian island and the sixth most important in terms of passenger volume.

In 2007, and due to the continuous increase in passengers, the airport opened a new terminal with twenty boarding gates. This expansion was able to attend to passenger needs and was the beginning of the growth plan for Catania-Fontanarossa Airport to provide new facilities, a panoramic restaurant, new runway and more office space.

Depending on which area of Sicily you are visiting, you need to take the A19 that connects the city of Catania with the city of Palermo, or the E45 that takes you to the south of the island.

Travelling around Sicily with a car hire

The best way to travel around this transalpine country on your holidays is by enjoying a rental car in Italy. If it is the most comfortable option for big cities such as Rome, then it is definitely the best way to discover Sicily.

Hiring a car is essential to get to all the hidden places that this island has to offer, regardless of where in Sicily you are staying. Getting behind the wheel of your own rental vehicle is an easy option, the island is quite big (the largest in the Mediterranean) and the public transport is not very good.

Get you hire car in Sicily and get to know this wonderful island full of small towns and villages, each with their own personality and with beautiful landscapes. All you need to do each day is decide they you want to go.

What to see in Sicily

Sicily is one of the most interesting islands on the Mediterranean. Greek temples, coastal villages, roman villages and a delicious gastronomy makes this one of the most sought after destinations during the summer season.

A route through the historic villas of Sicily

The island of Sicily is home to some spectacular historical villas that will transport you back in time as soon as you set foot on the street. Villas a short distance apart from each other and easy accessible with your car hire.

One of these gems is Palermo, an ancient city founded by the Phoenician people in S. VIII a.c., with immense architectural and artistic heritage such as Catacumbas de los Capuchinos (Catacombs), the Palacio de Zisa (Zisa Palace), the Palacio de los Normandos, (Normandos Palace), the Porta Nuova or the Piazza Vigliena (Vigliena Square).

As well as Palermo, the city of Syracuse; erected on an ancient Greek settlement or the town of Trapani famous for its salt plains and archaeological remains shows us the different people and civilizations that once inhabited Sicily. An archaeological and architectural treasure that can still be seen today in its streets and buildings.

If you prefer a village further away and more peaceful but still with the Sicilian charm, then you must visit San Marco d’Aluzio, Castelmola or Aci Castello, picturesque villages with restaurants offering some of the most authentic dishes popular on the island.

Discover the best beaches of Sicily

Sicily has 1500 kilometres of coastline and a variety of hideaways to suit everyone. You can find inaccessible coves, endless sandy beaches or natural pools of turquoise waters. Without a doubt the perfect settings to visit and get the most out of our rental car in Sicily.

The white, fine sand of Scala dei Turchi and Siculiana Mariana on the western part of the island. The beach of Cefalu, the wild beach of the Oasis of Vendicari or Cala Mosche, with its rocky hills and dunes. These are just some of the beautiful areas Sicily has to offer.

The northern coast of Italy, in the province of Trapani is also a great choice with its bays and beaches that overlook the sea of spectacular blue colours and where you can see the ‘Isla Égadi’ with three large islands standing in clear and crystalline waters and form the Marine Reserve of Égadi.

After we have seen the amazing villas and have taken a dip in one of the beautiful beaches, time for some nature. Natural reserves easily accessible by road and using your car hire in Sicily.

Sicily hides some of the most amazing landscapes in Europe, such as the active volcano Etna, which can be seen from space but can also be admired from the top of a cable car.

The Garganta de Alcántara is another natural wonder which has been formed over millions of years and whose capricious forms of its canyons can be enjoyed with a walk along the river that begins in Larderia.

The Parque del Nebrodi and the Parque del Madonie, home to the ‘Abies Nebroides’ around 20 local fir trees  which are unique in the world and in danger of extinction are other places for nature lovers to visit.

Thinking about going on a different road trip this fall? The charm of Palermo, Catania and the Valley of the Temples are waiting for you on your driving route through one of the most beautiful islands of Italy.