Currently of 778 reviews received from our customers, 72.0% said they were satisfied with the service provided during their car hire

Alex, Maria and the lady who drove the shuttle are a great face for the company. The Peugeot 3008 SUV was immaculately clean, great car to drive. Shuttle was on time, check in and out was painless and fast. I'll use this company again

The service on arrival was excellent. They offered me a sweet upgrade deal that I jumped at. Quality car, hassle free throughout. Deposit and fuel refunded instantly on return. Will use again.

The best car rental company I've been to. Great employees. Fast pick-up and nice service without charging anything extra as other companies do. Just the normal price that you booked the car for. The company is a 3Minute ride from the airport which was easy as the pick you up. Thank you so much. That was great

Excellent highly professional service by a very helpful, friendly and polite staff ready to answer all our questions with a smile and positive attitude. We were very pleased to be provided with an excellent, spotlessly clean high quality car at an impeccable value for money. We will definitely rent from Centauro again. Highly recommended!!!

The service was fast en the staff was very friendly and interested. We received all the information relevant for our situation and they explained their policy cristalclear. Very clean car. Comfortable driving without worries!

Terminal 1: Once you have collected your luggage, exit the terminal building, cross the road, and turn right. Walk towards parking area P5 where you can wait for the Centauro Rent a Car shuttle which comes every 10-15 minutes.

Terminal 2:  Once you have collected your luggage, come out of the terminal building using Exit 3 and walk approx.150 mts. to Exit 5 of Terminal 1. Cross the road and turn right. Walk towards parking area P5 where you can wait for the Centauro Rent a Car shuttle which comes every 10-15 minutes.

If you hire a car with Centauro Rent a Car a Thessaloniki airport you can be assured of the best service and a fleet of cars that are renewed on a yearly basis. You can also add to your reservation other extras that you may need such as additional drivers, GPS, full cover with no excess, child seats, etc.

With your rental car in Thessaloniki you can explore some beautiful locations which have guaranteed good weather most of the year.

Your car hire is waiting for you at Thessaloniki airport! 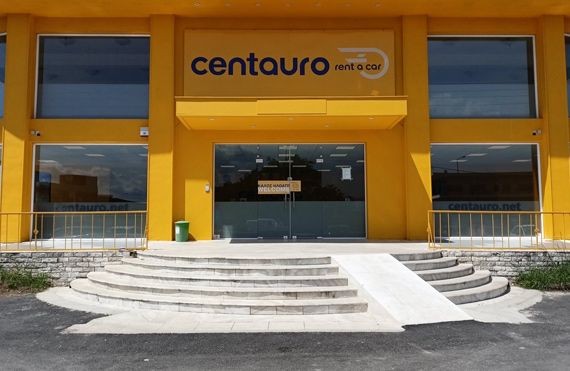 At Centauro Rent a Car we offer a wide selection of cars available to hire at Thessaloniki Airport which is renewed yearly.

What to see, do, and visit in Thessaloniki and its surroundings with your rental car.

South of the city of Thessaloniki is the Thessaloniki Airport (SKG), also known as the International Airport of Macedonia. It was opened in 1930 and today is one of the most important airports in Greece, since it has connections with cities such as Athens, Rhodes, Corfu, Samos or Lemnos, among others. In addition, from this airport there are also flights to different cities in Italy and Spain such as Milan, Girona, Rome, Naples. To get from the airport to the city of Thessaloniki you can use public transport or rent a car at the Thessaloniki-Macedonia airport and get a vehicle that allows you to reach the city in approximately 25 minutes.

Car hire in Thessaloniki is the most recommended option to tour the capital of the Macedonia region with total autonomy and freedom, without depending on bus schedules and routes. Plan a personalized route to explore the city at your leisure and visit some of the most representative places in the city, such as the Aristotle Square, the Nikis promenade, the Kapani market, the Arch of Galerius, the White Tower or  the Church of Saint Sophia, among others.

Thessaloniki, Greece’s second largest city, is  full of culture, history and art, where you can enjoy beautiful views and monuments that will leave you speechless.

What to see in Thessaloniki

- Church of Saint Sophia: Built in the 8th century, it is one of the oldest churches in the city and was declared a World Heritage Site by UNESCO. In the thirteenth century it became a cathedral, later it was a mosque for five centuries and is now a Greek Orthodox church. The entrance to the church is free of charge and the building is a model example of Byzantine architecture.

- Rotonda of Galerius: Also declared a World Heritage Site by UNESCO , this Byzantine church is believed to have been originally a temple dedicated to the god Zeus or a funerary site for Emperor Galerius. Its interior is very beautiful, full of mosaics and decorated with marble. Nearby, we find the Arch of Galerius, known as Kamara.

- Waterfront (Nikis): Nikis Avenue is a seaport that is worth strolling and relaxing, the views are wonderful. In addition, the promenade is decorated with many sculptures and monuments that do not go unnoticed. It is a part of the city full of life and very active, especially at sunset, which is also when you can admire the best views.

- White Tower: It is a defensive tower facing the sea, it is also known as Lefkos Pyrgos. It is one of the main monuments of the city and many see it as the symbol of Thessaloniki.

- Panaghia Chalkeon: Like the two churches mentioned above, it was declared a World Heritage Site and was converted into a mosque, although later it became an Orthodox church.

We propose you to enjoy a driving route through the most cultural Thessaloniki, a tour where you can see the most representative monuments, churches and museums of the city.

If you are on vacation in Thessaloniki you cannot miss the Greek salad, you can accompany it with a delicious moussaka, a variety of eggplant lasagna. The souvlaki is similar to the Moruno skewer and ntolmadakia, which are grape vine leaves that are filled with rice. The papoutsaki, on the other hand, is similar to what we know as stuffed eggplant and the saganaki batzos is fried Batzos cheese with Tsipouro and lemon.

The climate in Thessaloniki is Mediterranean, this is why summers are hot and winters moderate. This privileged place enjoys many sunny days a year, especially during summer. The coldest months are December, January and February, and if you go on your trip during these months you must keep yourself warm. The hottest months are July and August.

The months with more rainfall are February and November, so if you go on your trip to Thessaloniki during these months, we recommend you to stuff your suitcase with rainwear, raincoat, umbrella and waterproof boots. The best months to visit Thessaloniki are the months of March to June and September to November.

Are you planning a trip to Greece? Thessaloniki is one of the destinations that cannot be missed on your road trip through the Hellenic Nation. With this road trip through Greece you will discover incredible places and a rich culture.